Get an exclusive
Free Short Story 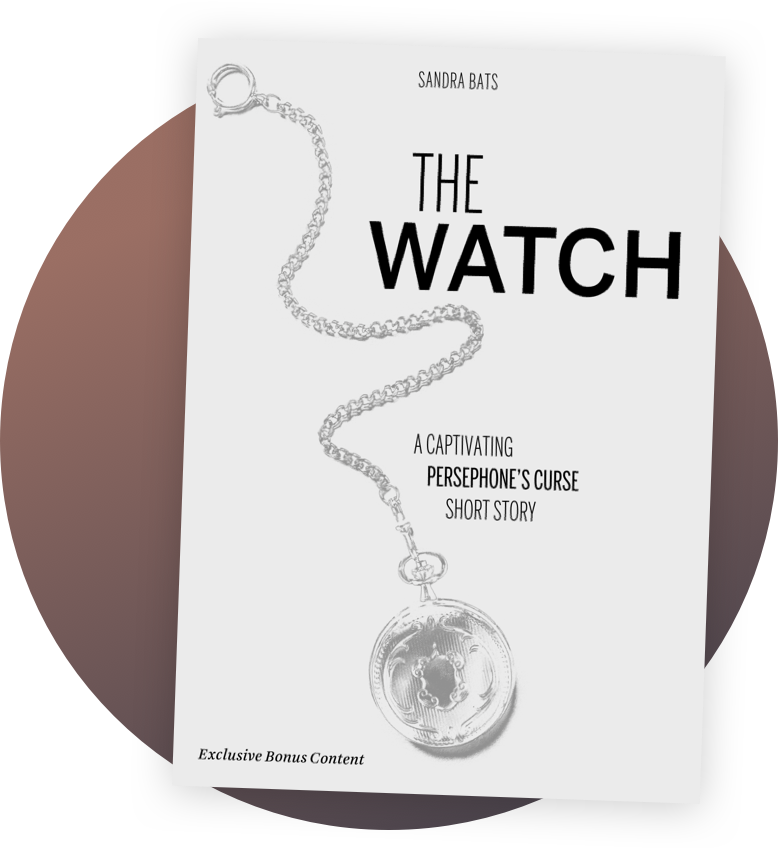 Intrigued by the novel, but not yet sure? Peek into the first pages of Persephone’s Curse or Persephone’s Grief:

The sickly-sweet stench of burned flesh lingered in the humid air. The burning pressure on my lower back let up and I was pushed forward. I stumbled over the concrete floor and my knees hit the ground. I sucked in a few gulps of air and refused the urge to press my hand to the freshly burned spot. I knew I’d find three parallel lines there — two of them older and the one they’d just burned into my skin.

A heavy boot kicked at my side and the owner of it ordered me to get up and stand back in line to wait my turn. The girl in front of me turned and grabbed my arm, hurling me to my feet. I dared to glance to the front of the line. Only three more girls in front me.

Then it would be my turn. The guard would put his hands all over me; would force himself on me, try to impregnate me so the government could find a cure for the virus killing women during childbirth.

I grasped at the details drilled into my mind. That the experience was supposed to be for the greater good; that I should have been proud I might have helped to find a cure for Persephone’s virus; that the experiments that scarred my stomach could have made it possible for others to survive childbirth someday.

That I was a worthless pawn, kidnapped by government-run labs to be impregnated like cattle, to be branded and experimented on and when I eventually died I’d leave behind a child they could either sell to rich people or experiment on.

Only two girls in front of me. Girls I’d never seen before. Girls older than me. I was just fourteen and I’d just started my period the week before, which was why I was there; suddenly considered fertile and ready to be put into another cell from that day on. In a cell with the other girls who were raped every so often.

The government that told us that we should have been proud to contribute to the greater good, was the government that brought this onto us. They had unleashed this virus around the time I’d been born and had engineered it to cull the population. But the virus got out of hand and soon enough, there was nothing saving women from bleeding to death when they should rejoice that they bore new lives. There was no help. Once you fell pregnant there was no cure. Once a placenta formed, removing it would see you bleeding out within hours.

The girl right in front me was next — the one who had pulled me to my feet — and the guard dragged her forward, and harshly forced her pants down and I couldn’t look at her. Instead, I glanced at the guard doing the brandings. He was in a hurry, likely because they were short staffed that day. The guards all looked the same — same buzzed haircuts, same navy-blue uniforms. They all symbolized the same to me; horror and pain and death.

Something clattered to the ground right before my feet and I glanced down. It was the guard’s gun. He hadn’t noticed yet, he was preoccupied, still raping the girl in front of me. I picked up the gun. It felt surprisingly heavy and not-so-surprisingly cold against my skin.

I only planned to use it on myself. That was the only way out. The only thought that occurred to me. But the guard noticed. He gave a shout and before I knew what I was doing, I pointed the gun at him. And I pulled the trigger. Screams echoed off the walls. I turned to the guard doing the brandings. I aimed at him and pulled the trigger. It was all a blur. I couldn’t feel my body. My own movements. Only this drive to live that I didn’t know I possessed.

There was a door behind him. Screams all around me as I rushed towards it. I hadn’t thought I’d survive this long. My hands trembled. Adrenaline coursed through my body and that I could feel. That spoke to me. It said; “Kill more of these monsters!”

I ran out the door. I blinked for a second. Glanced around. Shrill alarms rang. The guard patrolling the hallway turned. The window to my left was bright; a beacon of hope. The patrol guard lifted his gun, aimed it at me and for a second, he stared. I heard more guards approach. Orders being called out. I had no time. I lifted the gun and pulled the trigger. The guard hit the ground and I turned and ran towards the window. One shot. Two. The window splintered. I broke right through it, falling into bright  daylight.

The ground hit me sooner than I thought, and the crash knocked the wind out of me. The ground? How was I not dead?

Disoriented, I clambered to my feet. A fenced-in courtyard. A concrete pipe to my right. Did my feet hurt? I didn’t know. I ran when I heard more shouting, heard more shots fired. I hit my knees and crawled through the pipe. Got back to my feet and kept running.

I tried to grasp at something that could tell me where I was. Where I needed to run. But I didn’t know the city. I ran past people, through alleys. Ran until my breath left me. Ran until I found a dark corner. Then another one. Hid underneath a bridge smelling of death and waited. I waited and waited, praying to whatever there was that they wouldn’t find me. Waited until my injuries from the jump finally caught up with me and everything suddenly went black.

The Port – Capital of the Nation of the Americas

The detonation knocked me backwards and before I could regain my footing, I was sliding down the embankment I’d stood upon. I landed on my back with a painful smack, the wind knocked from my lungs by the impact. But as I assessed the damage, I figured I would be ok, albeit a bit bruised.

I lifted my head at my husband’s frantic shout and seeing him at the top of the embankment, I raised my hand in a wave, letting him know I was fine. He rushed down towards me, slipping on the snow. Behind him black smoke from the initial explosion rose as the rebels set more fires to public property. It was a miracle the military hadn’t intervened yet.

I scrambled to get back on my feet, pressing my hand into the ground when it made an awful cracking noise. Shock raced through me as I realized I hadn’t landed at the bottom of the embankment but had skidded right past it, onto the frozen river. Just as I was about to push to my feet the ice gave way. I screamed in shock as Jayden shouted my name. And then I was underwater.

I gasped at the cold, my mouth instantly filling with ice water. My clothes soaked outright and I frantically moved my arms, swimming upwards, back to the saving light passing through the ice into the dark water. I broke the surface, sputtering, gasping for air. I groped for the edges of the ice. It broke off as I tried to get ahold of it. Where was the shore? Something caught on the back collar of my jacket. I thrashed.

“Hold still!” His voice rang through the noise like a command. “I got you! Hold still.” I stopped thrashing, making Jayden the only thing to hold my head above water. “Ok, listen! I’m halfway on the ice and it’s not very thick. So, we need to move carefully.” His steady voice behind me was soothing at first but then his words made my panic flare again. “I need you to turn around.”

“I won’t! But we have to get you out of the water now. I need you to reach up and grab my hand, ok?”

I lifted my arm out of the water. My clothes were heavy, sticking to my skin, making movement difficult. My fingers ached from the cold but after a moment of struggling, I managed to wrap them around Jayden’s wrist as his hand closed around mine.

“Good! I’ll let go of your jacket now and you might sink a bit, but don’t panic. I’m not letting go of your arm, ok?”

I barely had time to nod and speaking was difficult through my chattering teeth. I sank for a second, my clothes dragging me down but the pull on my arm was steady.

“Good! Now I’ll try to pull you out and the ice might keep breaking underneath you but my legs are already on land. We’ll just keep trying until we reach the shore. It’s not far. No quick movements, though.”

Sign up to always be up to date on any excerpts and extras.